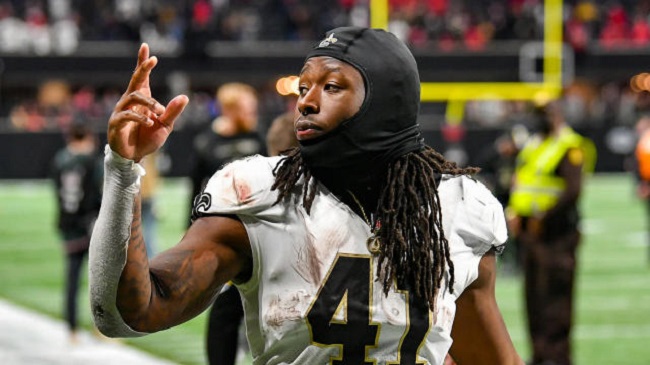 Alvin Kamara, star running back for the New Orleans Saints, was arrested for Battery in a Las Vegas nightclub on Saturday.

The 26-year-old running back was taken to Clark County jail and arrested on a charge of violence resulting in serious bodily injury.

According to the Las Vegas Metropolitan Police Department, at 5:50 p.m. on February 5th, officers were sent to a local hospital for a person who reported getting “battered” at a local nightclub.

The investigation led police to suspect Kamara of being the attacker. They found the five-time Pro Bowler on Sunday and arrested him without difficulty, so it looks like that actually happened.

The Pro Bowl was played in Las Vegas on Sunday, and Alvin was there to participate. He caught four of six targets for 23 yards. The New Orleans Saints’ star running back was arrested after playing in the exhibition game despite being accused of being involved in a fight the day before the Pro Bowl.

The New Orleans Saints’ standout running back Alvin Kamara was arrested on Sunday afternoon in Las Vegas on a felony charge of violence resulting in significant bodily harm, according to a statement released by the Las Vegas Metropolitan Police Department. He was freed from the Clark County Detention Center later that day after posting a $5,000 bond, and his next court date is scheduled for March 8, according to a jail official.

Mike Florio of Pro Football Talk said on Thursday that Kamara is “bracing” for a minimum six-week ban under the NFL’s personal conduct policy, though when exactly that suspension would be issued is still unclear.

The case hearing has been postponed until August. Aside from that, Florio said the NFL “usually prefers to wait until the criminal legal process has ended before taking action.” In spite of this, he continued, “Kamara conceivably could be placed on paid leave pending conclusion of the criminal matter given that he faces a felony accusation.”

Kamara faces at least a year in prison and a $10,000 fine if he is found guilty.

Kamara concluded the 2021 season with 240 carries for 898 yards and four touchdowns and added 47 receptions for 439 yards and five scores in 13 games.

The Saints’ offence revolves around this five-time Pro Bowler. In 2020, the 26-year-old athlete inked a five-year, $75 million contract deal.