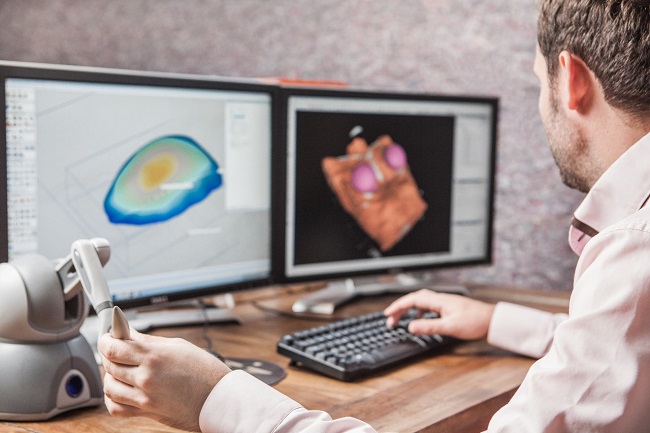 An article by two doctors from the University of Michigan on how they used a 3D-printed device to save a baby with a potentially fatal respiratory illness was published in today’s issue of the New England Journal of Medicine. The child’s airway is being held open by a device made of biodegradable plastic. Continue reading for more information about the Doctors Use 3D Printer to Custom-Design Implant For Baby.

Doctors Use 3D Printer to Custom-Design Implant For Baby

Kaiba Gionfriddo, the child, had a condition called tracheobronchomalacia, which caused the collapse of the airway leading to one of his lungs. He was unable to expel carbon dioxide or take in enough oxygen due to his illness. He was only six weeks old when his family noticed he was becoming blue when they were eating out. Two months after his birth, he had a breathing tube to be placed in his trachea to ensure his survival.

Kaiba’s medical team sought advice from Dr. Glenn Green, MD, associate professor of paediatric otolarygololgy at the University of Michigan. Together with Michigan biomedical engineering professor Scott Hollister, Ph.D., he designed a tracheal splint for Kaiba, utilising a CT image of Kaiba’s respiratory system as a model. On February 9, 2012, they put the splint on the bronchus of Kaiba’s left lung after getting urgent approval from the Food and Drug Administration to do so.

Our choice of material works well for this purpose “According to a press statement issued by Michigan, Hollister stated. “Two to three years is about how long it will take for this material to dissolve into the body, which is around how long it takes for the trachea to reconstruct and grow into a healthy state.

3D Printing Technology has been Utilised in Utero

Dr. Albert Woo, a paediatric plastic surgeon at St. Louis Children’s Hospital, said that this was the first time 3D printing technology has been utilised in utero “to identify facial deformity and severity of airway risk with a newborn.”

There was an issue, and it showed up when the mother, then 22, was 30 weeks pregnant.

Because of the fetus’s location, the ultrasound images were insufficient for making a diagnosis. She subsequently had an MRI, but even then, the doctors still weren’t sure if her airways would be clear after she was born.

Doctors were concerned that if the infant’s airways were clogged, they would have to perform an intubation (the insertion of a plastic tube into the infant’s windpipe) immediately after birth to help the infant breathe.

The experts at the University of Michigan were able to create a 3D model thanks to additional data obtained by a second specialist MRI. The foetal face was then 3D printed as a model.

The Birth and Subsequent Release of the Newborn Went Off Without a Hitch.

The model predicted the presence of a cleft lip and/or palate without predicting any respiratory complications. According to the story, the birth and subsequent release of the newborn went off without a hitch.

For 3D printing, a specialised “printing” equipment warms up plastic in layers, following the instructions of a computer programme. Printing prosthetic limbs, medical supplies, and models of jaws to use in reconstruction are just some of the medical applications that have been accomplished so far.

Woo, director of the 3D printing lab at Washington University School of Medicine in St. Louis, remarked, “In this specific instance when airway discomfort is a huge probable issue, I think maybe can help to change that area.”

According to him, this new instrument “truly provides a new tool so that clinicians much better prepared to deal with airway difficulties or other congenital defects that they need to diagnose critically right when kids are born.” Thanks for reading our article Doctors Use 3D Printer to Custom-Design Implant For Baby.

A Face Search Engine Anyone Can Use is Alarmingly Accurate

What is Avast SafePrice, Should You Remove It?