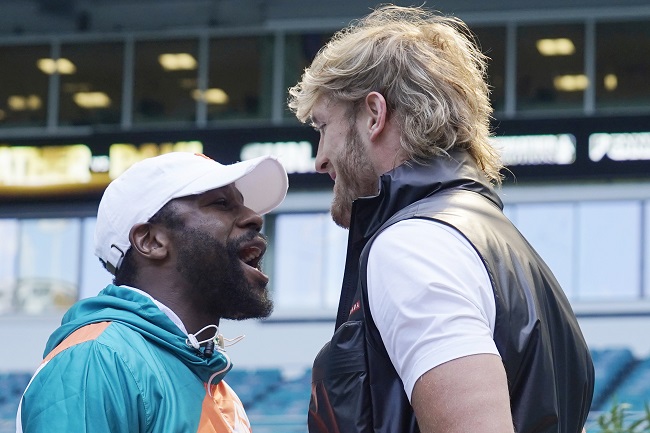 On June 6 at Hard Rock Stadium in Miami, Florida, Floyd Mayweather Jr. and Logan Paul will fight in a one-off exhibition match. In this exhibition, one of the greatest boxers of our time will face off against a YouTube star with a perfect professional record.

The Florida Boxing Commission has ruled that because to the extreme disparity in the fighters’ skill levels, experience levels, and physical build, the fight must take place under a unique set of rules.

This exhibition fight will not be recognised as a legitimate fight in the same way that the one between Mike Tyson and Roy Jones Jr. in November of last year was not. Mayweather will keep his unblemished record of 50-0, while Paul will remain at 0-1 in his professional career regardless of the outcome.

After his first exhibition fight on December 31, 2018, this will be Mayweather’s second. Mayweather won a three-round kickboxing bout by knocking out Tenshin Nasukawa in the opening round.

After Losing his Sole Professional Fight by Split Decision to KSI in November 2019, Paul is Making his Return to the Boxing Ring.

According to ESPN, there will not be a declared victor. There will just be one referee on hand instead of the usual three, although knockouts are still permitted. The three-knockdown rule is also in place here. In other words, the fight will be stopped instantly if Paul or Mayweather scores three knockdowns in the same round.

Mayweather and Paul first settled on a 12 ounce bout. By donning 10 ounce gloves, they want to boost the chances of scoring a knockout. alternatively, gloves. A winner will not be declared, even if a stoppage victory is recorded.

The rest of their bout will be fairly similar to a standard boxing match. Their fight will endure eight rounds, each one lasting three minutes, and no helmets will be allowed.

The fact that there will be no official winner of the battle is probably the most exciting development. Therefore, there is no requirement for impartial adjudicators.

In the event that there is no clear victor, play may be called off anyway. This could happen via technical knockout (which is perfectly legal) or the decision of the referee.

There will be a Maximum of Eight Three-Minute Rounds in this Fight.

Each fighter in Mayweather vs. Paul will use 10-ounce gloves, but no helmets.

Due to the extreme disparity in size between the combatants, this bout is being treated as only a demonstration rather than a legitimate bout. Paul, 26, disclosed this week that he will have to weigh in at no more than 190 pounds in order to compete, or else he will be fined $100,000 for every pound he weighs in excess of that.

While McGregor is likely to weigh in at a career-low 154 pounds on Sunday, Mayweather, one of the greatest pound-for-pound fighters of all time, is predicted to hit a new personal best of 160 pounds. Thanks for reading our article Floyd Mayweather Vs. Logan Paul Official Rules Breakdown …