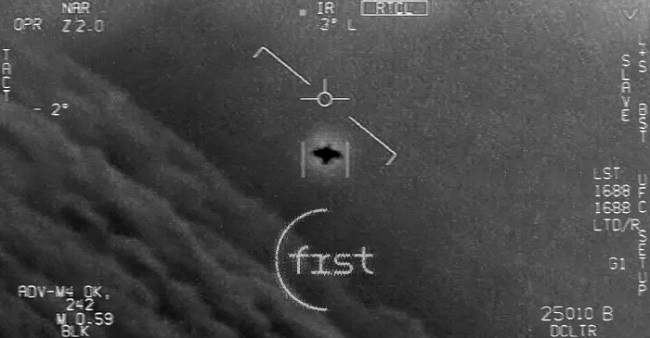 According to Gino Spocchia of the Independent, a Pentagon UFO unit would make some studies public after former advisors claimed the United States government secretly stored “vehicles not produced on this earth.” Please see original for more reading.

No Longer in Shadows, Pentagon’s U.F.O. Unit Will Make Some Findings Public

The programme “is not classified but deals with sensitive subjects,” yet “Pentagon officials will not disclose the programme,” Blumenthal and Kean wrote. “Yet it appeared in a Senate committee report last month outlining spending on the nation’s intelligence agencies for the coming year.

The report said the programme, the Unidentified Aerial Phenomenon Task Force, was “to standardise collection and reporting” on sightings of unexplained aerial vehicles, and that it was to report at least some of its findings to the public within 180 days after passage of the intelligence authorization act.”

Footage Reviewed By the Task Force

Photos and videos gathered by the Task Force show “what appears to be pyramid-shaped objects” hovering above the USS Russell in 2019, off the coast of California. On April 12, 2021, a Pentagon spokeswoman confirmed the authenticity of these images, saying, “I can confirm that the referenced photos were taken by Navy personnel. The UAPTF has included these incidents in their ongoing examinations.” Science writer Mick West has argued that these images are in fact fakes .

Later that month, Gough confirmed that other Navy personnel had taken video, which is now being reviewed by the Task Force. The footage was captured on July 15, 2019, in the USS Omaha’s CINC and supposedly depicts a sphere soaring over the ocean at night as viewed through an infrared (IR) camera, traversing the screen before pausing and gliding gently into the water.

Unfortunately, finding out if aliens exist is not the primary goal. An examination of “any links [UFOs] have to aggressive foreign governments, and the threat they pose to U.S. military assets and installations,” as stated in the report, is the primary objective.

Last week, Senate Select Committee on Intelligence chairman and Florida Republican Marco Rubio speculated to CBS Miami that a foreign power like China or Russia might have made “some technological jump” to explain the sightings near US military locations. Thanks for reading our article No Longer in Shadows, Pentagon’s U.F.O. Unit Will Make Some Findings Public.