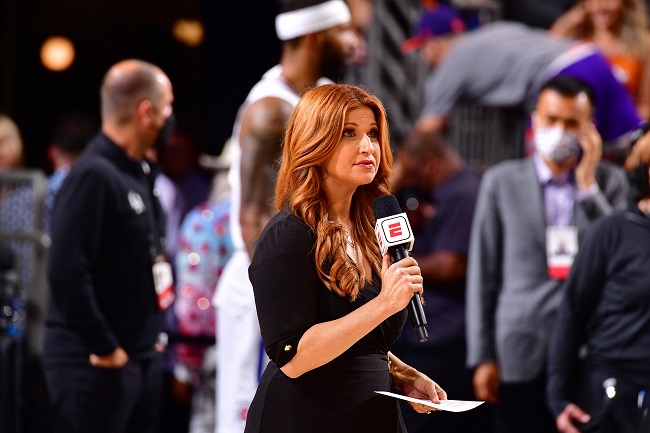 ESPN stated that Rachel Nichols, who had been scheduled to serve as ABC’s sideline reporter for the NBA Finals, will instead be working the first game of the series on Tuesday night. New hire Malika Andrews will take her place.

Rachel Nichols Out For N.B.A. Finals Coverage on ABC

Nichols covered the NBA Finals for ESPN last year, and she has covered many of the season’s biggest games for the network this year as well. It’s true that Disney owns both ABC and ESPN. ESPN has stated that they agree with this choice because it would help maintain the spotlight on the NBA Finals.

After reports surfaced last year that Nichols, a white reporter, had made racist comments towards his Black colleague Maria Taylor, the decision was made to replace Nichols with Andrews as the sideline reporter. According to Nichols, ESPN was “feeling pressure” regarding diversity when they chose Taylor to host the NBA Finals last year.

About two months after it was revealed that Rachel Nichols was caught on audio tape implying colleague Maria Taylor’s promotion was tied to diversity, ESPN has decided to discontinue her show, “The Jump,” and remove her from NBA programming.

When asked about the network’s new strategy for covering the NBA, David Roberts, who was named to the position last week, said, “we mutually decided that this approach regarding our NBA coverage was best for all concerned.”

Roberts praised Rachel, calling her a “great host and journalist” for her work covering the NBA.

On Instagram, Nichols also shared the news. At first, it was only reported by Sports Business Journal.

In his statement, Nichols expressed his gratitude for the opportunity to work on a project with some of his closest friends while also devoting five years to discussing a topic close to his heart. We’ll be forever grateful to our incredible producers and cast for making “The Jump” a joy to film. To be continued…”