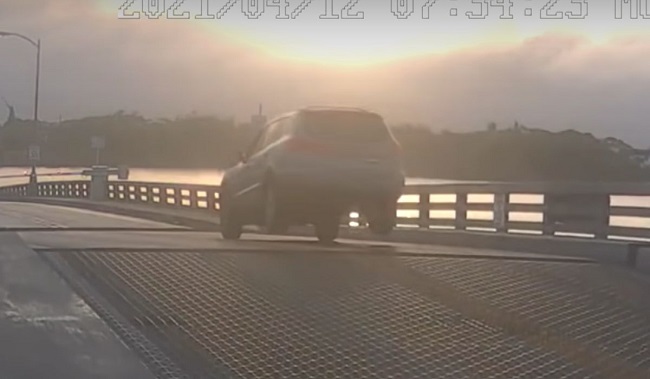 The driver of a Hyundai Santa Fe, thousands of miles away from Santa Fe, New Mexico, has made an attempt to imitate Santa’s sleigh. A SUV ploughed over traffic control arms and leaped the gap as a drawbridge raised in Daytona, Florida. Security cameras captured the whole flight of the lost Hyundai, and Daytona police are currently searching for the driver.

It is unclear at this time whether or not the aerial crossing was planned. The driver may or may not be a stereotypical “Florida dude,” albeit it is unclear at this time. As shown in the embedded video, the Santa Fe looks to be travelling at a moderate pace when it collides with the downed traffic arm typical of those found at railroad crossings and parking garages. The car appears to slow down but keep going, smashing the windshield and causing damage to the hood before jumping over the steadily increasing bridge deck.

Thankfully, the driver survived the high-flying leap and landed on the opposite side, where he or she could proceed to smash through the lowering arms of the bridge.

The SUV’s Driver is Currently Wanted By Police.

The accident happened early Monday morning in Daytona Beach, Florida, which is also the site of the famous Daytona 500 NASCAR race.

A spokesman for the Florida Safety Council, Bonnie Frank, told Fox 35 that the action endangers all cars on the bridge.

Those rails are there for a reason; Frank emphasised that breaking the law would have serious legal consequences.

A car was caught on camera in Florida crashing through a crossing arm and jumping over a rising drawbridge.

Video captured on Monday at Daytona Beach shows an SUV doing a stunt straight out of “The Fast and the Furious,” driving through a barrier and flying high above the opening drawbridge.

The truck landed on the other side of the drawbridge and immediately took off. The station reports that a second crossing arm was also broken in the crazy stunt.