The Oscar for best makeup and hairstyling goes to the crew behind Ma Rainey’s Black Bottom. Mia Neal and Jamika Wilson, both hairstylists, are the first Black women to take home the prize in their field. Sergio Lopez-Rivera, the film’s makeup artist, was also nominated for an Academy Award.

N eal made a hundred wigs for the movie, including two for Viola Davis, who plays Ma Rainey, the “Mother of the Blues.” The Juilliard-trained hairstylist created Oprah Winfrey’s wigs for The Immortal Life of Henrietta Lacks and worked on the Broadway productions of Julius Caesar, A Raisin in the Sun, and The Iceman Cometh. 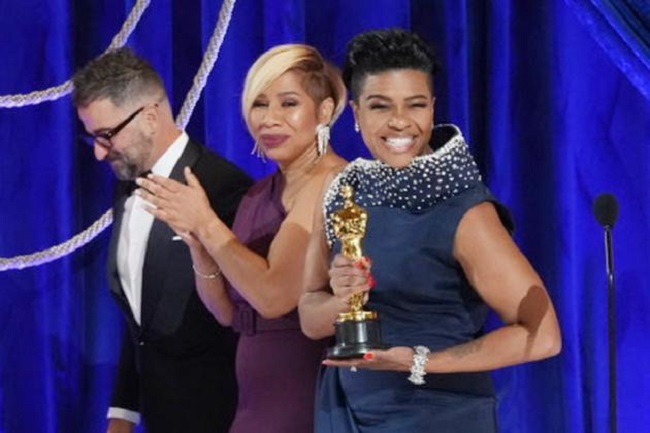 Neal told Vogue she had bought horsehair from England and braided it into one of the wigs to make it look more like the hairpieces the real Ma Rainey favoured. She claimed that she had to oil, sterilise, and boil the horsehair in order to make the custom wigs soft and lightweight because it had come coated in dung and lice eggs.

Two Academy Awards, for best costume design and best makeup and hairstyling, went to Ma Rainey’s Black Bottom. The movie, depicting the sidelining of African American musical traditions, made history with both its wins.

Ann Roth, At Age 91, Holds the Record for the Oldest Oscar-Winning Costume Designer.

The first African American women to win an Oscar for hair and cosmetics were Mia Neal and Jamika Wilson. Sergio Lopez-Rivera and them both won an Oscar.

Lead actress Viola Davis and lead actor Chadwick Boseman both received nominations. The Netflix release is dedicated to Boseman, who died from cancer on August 28, 2020.

The acclaimed piece by August Wilson, Ma Rainey’s Black Bottom, has been adapted for Netflix. The film follows blues singer Ma Rainey (Viola Davis), her white record producers, and her band as tensions mount during a recording session in Chicago in 1927. Among her band members was Levee, played by Chadwick Boseman.

This year at the BAFTAs, Ma Rainey’s Black Bottom also took home the awards for Best Costume Design and Best Hair and Makeup. Despite his untimely passing, Chadwick Boseman was awarded the Screen Actors Guild Award for Best Actor in a Motion Picture for his performance in Ma Rainey’s Black Bottom, while Viola Davis was named Best Actress in a Motion Picture for her work in the same film.

At the 78th Golden Globes, Chadwick Boseman was posthumously awarded the Best Actor trophy for his role in Ma Rainey’s Black Bottom. Taylor Simone Ledward, his wife, graciously accepted the honour in his stead.

It has more of a wire consistency than a hair-like one, which meant it was heavier than average and soon became dishevelled and wild. As Neal put it, “the wig was so thick and wiry that I could only thread one hair at a time through the lace I use to construct wigs.”

You may now watch “Ma Rainey’s Black Bottom” on Netflix.