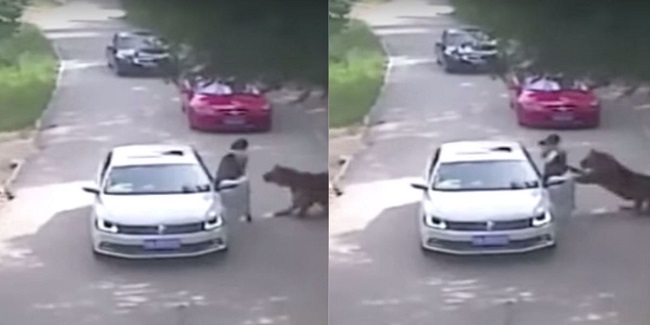 While visiting a safari park in Beijing, two women were attacked by a tiger. The entire attack was captured on camera.

After the attack that left one woman dead and another injured, authorities decided to secure the park.

It won’t be the Year of the Tiger again until 2022, but after a tragic event at a Beijing safari park in 2016, the big cat became a social media villain.

One of the most viewed videos in China in 2016 was of a tiger pulling a woman deep into its enclosure at Badaling Safari Park, and the horrifying images rapidly went viral throughout the world.

The woman’s car had stopped inside the tiger enclosure, and she had gotten out of it for reasons that were not immediately evident. It just took the tiger a few seconds to pounce and drag her away. Footage from a nearby surveillance camera shows the woman being dragged away by the tiger, leading her mother to exit the vehicle and try to save her.

After killing the mother, the tiger attacked the daughter, seriously injuring her. The younger woman now alleges she got carsick and had to get out of the car, and that she wasn’t adequately advised of the risks involved. From the park, she is requesting two million yuan in damages, which is just under $300,000.

According to Zhao, a Park Ranger in a Neighbouring Car did Nothing to Help.

She told the newspaper that she signed a document promising not to get out of her car assuming it was a registration to get into the park. She claims the ticket taker gave her no explanation.

The publication quoted a man from Badaling Wildlife World with the surname Cao as saying the park would follow the recommendations of the government investigation report, which exonerated the park from blame.

Cao further noted that the park would only compensate the family out of a sense of moral obligation.

For Zhao’s injury, the family asked for more than 1.5 million yuan in compensation, but the park only agreed to pay 745,000 yuan. The publication reported that, citing Zhao’s father, the family had reached a settlement with the estate for $1.2 million following the death of Zhao’s mother.

People were outraged after reading the article, with the vast majority supporting the park and condemning Zhao for disobeying park laws and ignoring warning signs. This new development has led to yet another round of condemnation of Zhao on Weibo, China’s version of Twitter.