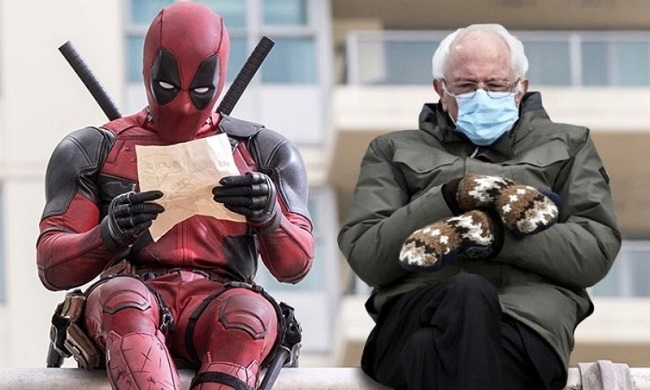 Sen. Bernie Sanders of Vermont is a fierce advocate of fair wages and a former presidential candidate who lost the Democratic nomination to now-President Joe Biden. And thanks to his practical clothing choices he is also now the center of a seemingly endless flood of altered pictures that dominated some corners of the internet in the hours after Biden’s socially distanced inauguration Wednesday.

Bernie Sanders is Once Again The Star of a Meme

Amid the dark suits and bright coats dotting the Capitol steps, Sanders was photographed sitting masked, cross-legged and bundled up in a bulky coat and mittens against the frigid weather in Washington, D.C. Soon after, the image, taken by photographer Brendan Smialowski for Getty Images, began to circulate on social media inserted into a wide array of photographs and scenes from movies and artworks.

U.S. Senator Bernie Sanders, wrapped up in a winter coat and mittens at the presidential inauguration, is now a fashion icon for looking like he was running an errand at the historic event.

Amid a sea of designer coats, the 79-year-old senator made a sartorial statement on Wednesday by showing up in a jacket by snowboarding equipment company Burton and home-made wool mittens, carrying a large brown envelope.

An image of Sanders sitting arms and legs crossed, captured by AFP, inspired netizens to place him in both familiar and unlikely settings.

Several Memes Show the Native New Yorker on Mass transit, including Chilling to Music on Headphones.

Things certainly feel momentous today. After four long and grueling years of having Donald Trump as president, so many Americans can’t help but feel like they now have a fresh start, a second chance to do better, an opportunity to try this whole democracy thing one more time. After a long and tense January and as the country and world watched Lady Gaga, J.Lo, Vice President Kamala Harris, and 46th President of the United States Joe Biden take the inauguration stage, a sigh of relief washed over the nation.

These feelings of hope and joy are all good and well, but the past few years have been just as sobering as they have been grueling. It would be a mistake to think today automatically amounts to any change bigger than a change of the guard unless a lot of work is put in to really take this country in a better direction.

Luckily, this is the exact energy Senator Bernie Sanders brought to today’s event as he showed he was ready to put in the work. A picture of him wearing a blue mask and fluffy mittens with his legs crossed emerged as the day’s viral meme. He has things to do and places to be. His demeanor is unsentimental, unmoved, and largely unbothered.

Bernie Sanders is “once again asking for your financial support” in some snowy suburb in this viral campaign ad screenshot. Use this meme maker to generate your own version, for whenever someone or something makes demands or requests.